I was asked at work a few days ago to pass out some fliers along King Street in downtown Leesburg for a couple events we have coming up. Originally, they wanted me to do it after work but most places close at either 5 or 5:30 so I offered to come into town today (Saturday) since Morven Park tours were off due to a large wine event onsite. It was about 90 degrees outside but I walked around for an hour and a half and I was not disappointed.

I stopped in probably ten or so shops and each place allowed me to leave some fliers on a counter or tape it to the wall. But I have found some gems and I will share a few experiences. First, my last stop:

Lola’s Cookies (www.lolacookies.com
109 South King Street) is a small place but do they have some good cupcakes. Now, this was my first time here, but first impressions are important. I had an Apple Spice Cupcake that was to die for. Pretty sure I devoured it in under 30 seconds. I did savor it a little bit 😉 The cupcake was $3.15 + tax, but I will be back.

Another store I thoroughly enjoyed was called Four Shabby Chicks (30 S. King Street,  http://fourshabbychicks.blogspot.com). I love antiques and had to contain myself while walking around. It is a very large store with at least two levels. Books, pins, furniture, silverware, you name it. I randomly stopped to look at some old wooden nickels and came to find out they were from Shippensburg, Pennsylvania, where I lived for almost two years and went to grad school. The small nickels that are reminiscent of the old POGS (remember those?) were 4 for a dollar, so I bought five and will give one to a friend.

Another comment to make is on the parking garage. There are lots in the historic area and the parking garage off Loudoun and Market Streets are free after 5pm and are FREE on weekends. Really easy to get to, parking is decent and within a few blocks of the main historic district.

If you haven’t been to downtown Leesburg and have always wanted to check it out, it is well worth your time. Maybe not so much on a 90 degree day, but on a nice, cool afternoon in the fall. 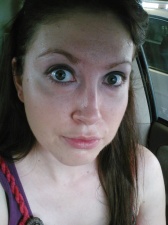 Yes, it was a little hot out ha.

I’ve been planning on going to Mount Vernon, Monticello and Montpelier for a while now, and I want to go in the fall when the colors are changing and it’s not overly crowded. Visiting Monticello’s website I discovered you can sign up for something called the Presidents Passport. It’s free (!!) and there are over 50 ways to save on admission, meals and gift shop purchases. Go here to sign up: http://prespassport.monticello.org

Sites to save on include: Mount Vernon (admission), Monticello and Montpelier (gift shop purchases), Michie Tavern, and more. Basically around Charlottesville and Alexandria, Virginia. Hotel discounts are also available. I believe all are good until December 31, 2013. Happy couponing!

I get asked this question a lot, “Why Virginia?” Well, first of all, I love history. Especially Civil War and Early American history. What state provides the best of both worlds? Virginia. Secondly, since 2003, when I was 16, my mom and I took our first trip to Virginia, specifically Williamsburg, and we took a few pit stops on the way. Those pit stops included: Mount Vernon, Monticello and, probably most important of all, Stonewall Jackson’s House in Lexington. I’ll leave my love of Jackson for another blog 🙂 Thirdly, and most recently, I have come to discover that a lot of my ancestors started off in Virginia.

As most people know, I have been actively working on my family tree since 2008, but it wasn’t until January 2012 that I gave in and finally started working on ancestry.com with a subscription. Long story short, over the course of the past year, I have discovered I have connections to several prominent Virginians, including men who were a part of the House of Burgesses, the War of 1812, and both the Revolutionary and Civil Wars. Although they are more recent developments, living in Virginia has compelled me to really search those ancestral ties further. I even just discovered that I have some 5x great grandparents from my paternal side buried about half an hour from where I live.

As I continue to discover where my ancestors are buried, see where they lived (maybe?!) and visit these sites, I think it was meant to be that I live here.

I have decided to start blogging, but I’m not sure how good I will be at it. Writing, yes. Blogging in general, no. I did have a Xanga account way back when. Remember Xanga? Before Facebook but during Myspace. Ahh, those were the days.

What I have decided to blog about in general are my adventures in Virginia, but will probably go beyond. I enjoy traveling, taking on new adventures, seeing historic sites, and just continuing to learn more about my favorite state in the Union (but was once part of the Confederacy)

I’ve already done a bit of traveling around the northern portion of the state (of which I may refer to as NOVA in the future. i.e. NOrthern VirginiA). I will post photos and experiences so you can be a part of my East Coast adventures! But it would be easier if friends and family came to visit (hint hint).

I am looking forward to fall in Virginia. I want to see all the leaves change, enjoy hot cider, walk around an old historic home or cemetery, and just relax. I know, walking around an old cemetery doesn’t sound overly relaxing but we all have our own quirks.

Ok, that is all for now. Happy reading!